Registered on the OAIS review wiki (http://review.oais.info) in issues:

Originally the below headers correspond to fields on submission from via http://review.oais.info

Introduce an OAIS which may be geographically distributed but with all parts under the same Management.

Interoperability for distributed digital preservation, can be expressed and analyzed by viewing (Outer) functional entities as fully or partly described by one or more Inner OAIS. In this case part of functions related to the distributed aspects covered by the Inner OAIS are covered there rather than in the (Outer OAIS) functional entities. An example is collaborative bit preservation which can be expressed as an Inner OAIS of the (Outer) Archival Storage/Preservation Storage. In this case e.g. preservation planning and history recording of media migration are covered by the Data Management and Preservation Planning within the Inner OAIS, and thus not part of the Data Management and Preservation Planning of the (Outer) OAIS.

Add as 5th bullet in introduction of section 6.1:

Add section after Section 6.1.4
6.1.5 ARCHIVES WITH DISTRIBUTED DIGITAL PRESERVATION
<The text and figures given in attached document>

Organisation of the submitter:

The Royal Library of Denmark (reviewed via OAIS Community)

Explanation of the reason for the suggested change:

Note also that the exact reference for the OO-IO model will be provided as soon as possible, but cannot be provided here as it has not been published yet.

6.1.5 ARCHIVES WITH DISTRIBUTED DIGITAL PRESERVATION
A helpful way to describe interoperability for distributed digital preservation is to use the Outer OAIS – Inner OAIS model (the OO-IO model) [D13,D14,D15,D16]. This model can support the analysis and audit of collaborative arrangements between multiple OAIS’s, where OAIS’s is used as the plural form of an OAIS.

The OO-IO model is depicted below in a full version:

An example of using the OO-IO model for an OAIS basing bit preservation on a solution with distribution of replicas is illustrated in the following figure: 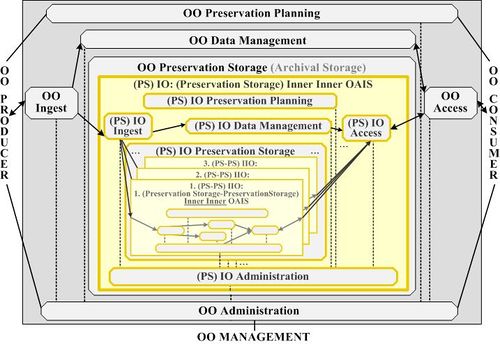 For example audits of the OAIS will include audits of each of the Inner OAIS’s (and Inner-Inner OAIS’s) for the parts of the functional entities that there are agreed to cover.

So far the most elaborate use cases has been for Preservation Storage (Archival Storage) - especially when describing all aspects of distribution in more organizations/platforms etc. as well as all OAIS aspects of bit preservation. The Ingest case is also becoming increasingly relevant in cases where the creation of a final AIP is spanning over long periods, and thus the SIP needs to be secured as an Inner OAIS AIP of the Ingest functional entity.

The Ingest case is also becoming increasingly relevant – where an inner OAIS that takes care of the immediate preservation of material, where the time of the actual generation of AIPs for long term preservation is long. That means the time interval (e.g. a year), where material cannot be assumed to be resubmitted, and where the material is at risk of getting lost if only ordinary backup facilities are used.

One of the implicit consequences of distribution in digital preservation, is the need for coordination among collaborators. Establishment and performance of this coordination is crucial for ensuring sustainability of the overall organizational endeavor.